Tatjana Bush. She works at an airport hotel. One of many that caters for overnight travellers. Comfortable rooms, universal breakfasts. Leave your car while you are abroad. Courtesy bus to the nearby airport.

Tatjana Bush. She has a slow-burn plan to make money. She works as a receptionist in an airport hotel. She is stunningly attractive and terribly intelligent. Born into Communist poverty, she devoured education, the permitted and the off-register; learned English with purpose and speaks it (extremely fluently now) with a sensual honey and nuts accent, a little halting, a little deep. She knows that men find it alluring and that women sense vulnerability. She is good with children.

Her own marriage to the son of the farmer where she first worked in an exchange “summer labour camp” somewhere in Dorset collapsed six years ago. He was too young, too taken by the physical – and could not match Tatjana’s ambition, her hunger for more than simple satisfaction, mediocrity. Thankfully, she believes there were no children; but still sometimes at the check-in desk she allows herself to be just a little envious  of the families coming to the hotel for an overnight stay before planned early morning flights. Before travel and horizons broadening. She wanted to be a teacher once, inspired by an international project her school was involved in, when she first learned of the materialistic world to the west. Sure, the Berlin wall had been tumbled, but cultures were still only clumsily making overtures to each other. She had made the most of it. Mostly surprised that her English was really so good.

The the teacher thing hadn’t worked out. Sometimes, when she allowed herself to think back she is a little sorry. She knows the role would have suited her giving nature; but this job is good.  She is trusted, earns money enough to send some home to her parents. She thought she would miss them more than she actually does. But she knows her duty, and never reveals this fact. The others in similar positions at the hotel, barmen, waitresses, cleaners were all intelligent. Some had come from professional jobs in their own countries – just to work for the money, so much better here. They often talked of what they had left behind; those with families with lumps in their throats, but they always convinced each other that they were doing the right thing.

There were duties to keep them busy: checking in cars, early morning calls, room service orders to be acted on, passed on, requests for information, smiles to be shown when tomorrow’s passengers looked uncertain or when dealing with passes made by some of the men … and sometimes covering one another’s shifts because, well, just because.

It was while covering a cleaning shift for Elsbieta that Tatjana hatched the plan. There were seven rooms to tidy, replace water bottles, spray air freshener and collect  the laundry, replace the bedsheets. Most occupants used the room so little it was almost indecent to need to replace bed linen that had been slept in for a few restless hours… before the automated call, the attempts to tiptoe down soundproofed corridors with two suitcases and lift them on to the courtesy bus and off to …. to see the world of course. But the hotel had a reputation. Tatjana had a reputation too. Reliable. Honest.  Nothing too much trouble. She deserved this reputation too, she was thorough. And always thinking. She put suggestions into the hotel suggestions box, some in her own name and they were  noticed by management. In some cases she filled in the room questionnaires; they were mostly tick boxes anyway. And these matched what she had suggested in the staff box. Management did not notice.

But when cleaning the room she noticed that the occupant had left the complimentary newspaper spread out on the floor. Almost certainly it had fallen there from the bed as he (a single man from Lancashire) had left the room. It had fallen open at the Puzzles page: Sudoku, train your brain and vocabulary tests (multiple choice answers) and the strangely English phenomenon: crosswords. Three: a quick one and two prize crosswords. Prize Crosswords!

That single word “Prize” grabbed her attention. A two hundred and fifty pound prize! Every day! She had rarely tried her hand at these types of puzzle, believing that the quick ones were really tests of depth of vocabulary but the others demanded some twisted logic she had never tried to fathom. Cryptic clues … anagrams … she was confident in her own linguistic ability but this seemed like a step too far, so she simply ignored it. But this guy, the one from Lancashire had done most of the answers.

In the next room, lady from Swansea and the next, elderly couple from Devon she glanced at the papers. Yes, yes, yes!

Most people had made some attempt to fill in the answers. She efficiently took out the puzzle pages and took them back to the room she shared with Elsbieta. The remainder she recycled: hotel policy. Off-duty, with rising excitement she compiled as many answers as she could – and in two hours had completed both puzzles. She simply did not try to understand the sometimes tortuous route from clue to answers but checked and cross referenced them, using a dictionary only once and sent them off.

The room occupants will not mind, indeed how would they ever know? They were given a free paper and used up the free time before sleep looking at whatever news – or pictures- took their fancy. Most going to tourist destinations would be quite happy to ignore the news for the next few weeks anyway. Those going on business trips usually took their newspapers with them anyway, she had noticed, though was not quite sure why.

So every day Tatjana collects the puzzle pages, pores over the grids, completes the puzzles and sends them in.

This is her plan – Tatjana Bush, queen of the crossword puzzles.

One thought on “Tatjana” 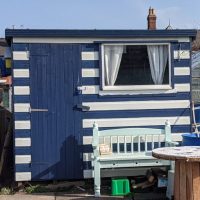