Went to the cinema to see Gravity. Opted for the 3-D version. Good decision: the effects were truly realistic and made me realise that there really are such things as space stations and Shuttle-type missions. With people doing jobs in space!

The film itself is an epic, in terms of scenery, special effects, drama,  acting, storyline, humour, message and the way it set me thinking. I will not spoil the film for you; but would recommend it whole-heartedly. It is not a science fiction story, I would suggest, but space and the frontiers of current knowledge are used as a setting for a wholly human story on many levels.

But it coincided, in my perhaps too-fertile imagination, that tends to make links that are universally invisible to others and so …

… one post-Christmas holiday period we were watching 2001: Space Odyssey. Famous in its time for state-of-the-art special effects, soundtrack, profound concepts, the amazing final sequence (what did it mean?) and for the monoliths. Now I had never worked out the rationale; simply enjoyed the scope of the film, the storyline such as it seemed to be. But a friend gave me his theory, over the ‘phone.

“See?” he said,” the monolith appears at certain stages of the evolution of man: the use of tools, tools as weapons, territorialism; the next one on the eve of space travel; the third, the journey into ourselves, across time …” 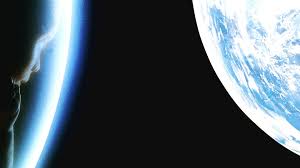 Suddenly the Kubrick film began to fit together in so many more new ways for me. His explanation (thanks for being so patient mate) was my own monolith. This isn’t the time and place to go into a deep philosophical dissertation on that film (though I will try to find links to other blogs that do) or to suggest that Gravity and Space Odyssey are in any way similar; for me they certainly are not.

So, after the slight digression I hope you are still following … at the Remembrance Sunday service yesterday I had another  -hmm, not quite but almost-monolith – moment. Well our local Remembrance Garden has always had the double, wrought-iron gates – complete with names of the fallen – where wreaths were always traditionally laid, and wooden cross poppies jabbed into the ground nearby.

This year, however, the whole ceremony took place inside the garden, with leaves falling like something from a well-planned film as the tokens were laid at the base of a new memorial obelisk, like a smaller version of Cleopatra’s Needle. 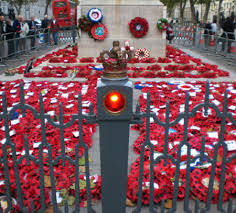 The vicar told us, during his address,  that it “bore no names, as it was to represent all who had lost their lives in conflicts: civilian and military”

The inference being: one, there isn’t enough space to fit so many names … and, er we probably don’t know them all anyway and second, that the onlooker simply remembers the people they know of and is satisfied. May be awkward but it would work for me – to a point.

The service went well, P.A. working well, bright blue sky, a couple of butterflies hanging in the air beneath the tall limes, standards lowered, The Last Post. People I recognised, the silence broken only by a couple of children too young to know what is proper – but at least they were introduced to the ceremony – and an ambulance on the main road. A big crowd, remarkable and remarked upon.  A bagpiper.

On closer inspection after the parade had marched out: Royal British Legion, ATC, Sea Cadets, dignitaries, Beavers I saw that the “needle” is laid on a plinth that is inscribed “Past,” on one side; “Present” on a second and “Future” on the third.

And another thought occurred to me;

Mankind encountered the Arthur C. Clarke monolith at evolution points that changed his understanding of the world, himself and society.

We need such a moment now. That will make all of us see peace as a universal goal, without taking away the enormously brilliant adventures, imagination and invention of which we are capable.

… and preferably some time soon.