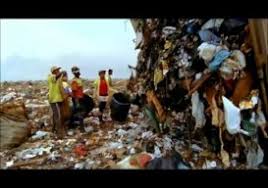 Sat back earlier today to watch some mind-numbing pre-Christmas telly. Seemed to be a good idea after some usual seasonal stress.

But what I settled on, after some channel hopping was disturbing, wonder-filled and astounding, even though I had missed the first half an hour or so. 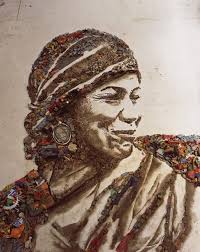 About an artist named Vik Muniz who visits a garbage tip in – I think Sao Paulo – seeking inspiration for work, but which engages him in a quest to improve the lives of, at least some of the people there who pick out and recycle materials. It’s a bit of a crusading film. But it struck straight to my heart. Great camera work, but mostly watching the development as he realises what is going on and begins to see the role he can play. It is ruthless in parts. It is gritty and romantic in others; but we see the “pickers” as proud characters. And the project Muniz creates gives them independence, a voice (each) and a chance to change their circumstances.

I heartily recommend you find this film and look at it with an open mind. It is not possible for everyone to be changed by such projects, but, surely worth a shot every now and then. 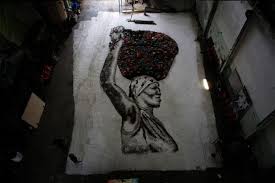 There were too many wise words and moments for me to record (or remember ) everyone, but one I did get down (though it may be somewhat paraphrased was this one, from Muniz himself;

“People in a museum looking at a painting …

“What do they do/ They stand still. Look at the painting. They do this …

“Why do they do this? Are they drunk? What are they doing? …

“Some will take a step back. They will see more than the picture: they may see the idea behind it.”

* Title of this post comes from something one of the organisers of the picking group said, very proudly, when interviewed on – I think – Brazilian TV – :

“You got that wrong; I’m sorry. We are not rubbish pickers, we are pickers of recycled materials.”

3 thoughts on ““We Are Not Rubbish Pickers*””