Been a  long time – a very, very long time – since I’ve felt like being around people. Strange how a few moments will change your outlook. Change your life. I’d never thought about it before. Had no reason to, I guess. But the accident changed all that. Changed me. Changed me and changed the people I had around me too. Funny how that can happen, don’t you think?

I began to feel that, if I shunned the hum-drum, noisy, mean-nothing company – and I certainly did – they seemed to … well to ignore me. It became like I wasn’t there for them. I didn’t mind; well perhaps I really did but hid it from even myself. Hid it for so long it became fact, became the solid, immoveable truth.

I took to hanging out in the quiet places. The places that were at first so unfamiliar to me. Away from my usual haunts. The alleyway between the factories with the long-unrepaired streetlights. In the wall shadows cast by the railway marshalling yard lights. The demolished church on the arboretum corner. The quiet places. The shadows. The quiet whispering darknesses. I became those places. The night hours. It was, simply not necessary to be bothered by people any more. Not my family. Not my friends. Not any one of those people I hadn’t met yet. 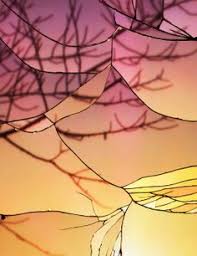 And – I missed them not. Keeping my own company. Alone but not lonely. I spent my time thinking about events in my life. I am sure that I exaggerated some of them, that I may even have completely invented others. But I kept returning to the accident. Just in snatches. The country road home, made unfamiliar by November fog. The road not holding the tyres of the car. The rush that started as a slide. The crackle, jerk, breaking of the quick thorn hedge. The start of the roll. The path to the oak tree on which I swung as a child. The sickening echoing shock of coming to dead-stop.

And still I stayed away from people. Quite deliberately. I saw no sense any more in their busyness, their businesses.

For years I went on in that way.

But, just lately I’m feeling a change. It may have started when that poor, slope-shouldered man strolled sobbing in the arboretum. Late at night. When nobody was around – he believed – to see him weep. His path had taken him, un-noticing, uncaring across the shards of broken stained glass beneath where the west wall of the church once stood. He leaned, shaking against what was left of a door frame for long minutes.

I did not approach him. Why should I? Why would I? I knew better than to intrude on his privacy. On his grief. On his deeply felt but undeserved guilt. He came back. Twelve nights in a row, even though it rained for three of them. By the final night I began to think he recognised my own presence there.

But he didn’t speak. Didn’t approach me. I imagine he was respecting my privacy too – in the way that I looked to protect his. But we shared a physical space: alleys where large puddles were rippled by big raindrops, that reflected occasional stars, occasional clouds. We shared a time too. The midnight-quiet dark time. When people were scarce. When people slept. To dream to recover. To refresh.

But my curiosity was growing. He did nothing to encourage this. It was all my own … fault (if fault be the right word). I know this when I think about it. And, trust me I have the time to think, the luxury of time to think. So … I’d watch him, ever more closely. At a distance. Of course. I took to following him too. I am sure that – to begin with at any rate – he did not know this. But I’d watch him pause at the porch door of a house. Look at the little blue car parked, unused in the driveway. Once he leaned heavily on the bonnet. Both hands pressing down, his head dropped forward between his shoulder blades, breathing noisily.

Eventually he’d take the key and unlock the door. Enter slowly the dark, still house. He never bothered to put the lights on. The rooms didn’t need them. He didn’t want them. Lights lit up the photographs, the memories, ornaments, and these were times when he would do without their painful reminders.

He didn’t drink to excess. Not usually. He drank to help him forget. It worked a few times, though usually not. One evening he even accompanied a younger woman to a flat not far away from his own home. But, though she was willing he couldn’t get himself past the first hot kisses and fumbles. He rushed away, head: to the demolished church. Where he wept for over an hour.

Sometimes I am convinced that I could have easily gotten in to his house. Even if, one careless pre-dawn he hadn’t left the front door unlocked. It was just easier … and, honestly, sometimes I convinced myself that it was what he wanted to happen anyway.

Other times I believe it was a mistake.

But I did it anyway. Stood in the darkened hallway while he lay collapsed on the sofa, his world a small black space that not even his snores could breach. He had been drunk.

But I lingered that night. I couldn’t help myself. Neither could I explain why I was so drawn to the man – this miserable man – or his unforgivingly lonely dwelling. But I made myself familiar  with the place. The untidiness. The random collections of magazines, papers, underclothes, library books. Fines to be paid. But among the discarded dinner plates I could also sense the underlying determination to go on; not to give up.

So I returned. This will not have been a surprise to him. He must have known it would go this way and, by now, I no longer startled him when ho glance me out of the corner of his eye. My pale presence. Anyway he never objected and our living – side by side – if not together became the way it was.

I took great comfort from it, that steady undemanding presence of his. He never said but I think he got the same from my being there.

And, for the first time since my car hit the tree in which I played as a child – the tree that took my life – I am beginning to feel  a new connection with the living human race.

The galleon  intact, but inverted.

Passengers on the moonbridge express,

While refusing to acknowledge

Join together to laugh,

“Far from home!” the penguin cries,

King of the silver horses, sighs.

If we can survive these lows,

Find our own masks –

But the familiar beat

We were once angels of the

Now we stare through

We have to learn to

Looking back on my

The ignorances, the hard paths

I had to walk across the wastelands.

Gave away my days,

My coin, my body.

Pass it on, move along.

Despite, because of it all

That strip of ghost-near land

I am disquieted observer –

Unable to decide whether

Both in the winning

And the giving away.

On the bastion banks again;

END_OF_DOCUMENT_TOKEN_TO_BE_REPLACED

Let’s call it your side,

END_OF_DOCUMENT_TOKEN_TO_BE_REPLACED

I try watching my thoughts;

There are those that say it helps –

That leap, in happy dreams

(Where time has no relevance),