But we set out on a mission: to find the churchyard where former Led Zeppelin drummer John Bonham is buried. Led Zeppelin – never my favourite band from a time where loyalties were tribal: so the Beatles or the Rolling Stones? Deep Purple or Led Zeppelin? Mod or rocker? And me? Loved the strutting arrogance of the Stones and I’d heard Made in Japan at a biker’s party – my loyalties were forged.

But Led Zeppelin were legendary*, among other things, for being loud. And especially Bonham: no nonsense, intimidating, aggressive, big and demanding. Born and raised in the West Midlands. Eventually we find the church (St Michael and All Angels at Rushock ); surrounded by sweeping agricultural farmland: barley, pastures … and quiet. A few martins slipping through the blue skies. Otherwise, if you stop talking the only sound you can hear is your own breathing. This provokes some interesting thoughts about life, death he nature of eternity and – once photos have been taken and tokens left … where to go next.

Eventually we are homeward (that-is-to-say-Walsall-hotel) bound, re-joining theM6 from the M5 and my Sicilian guest is happy to point out “the centre of the universe” (a.k.a. Bescot Stadium) in full and fine view from the heights of the elevated motorway. Also I explain the largest electronically operated roadside advertising hoarding in Europe (is it still?) … strange what we can be proud of eh? But what’s this? The sign is – really – advertising Aston Villa ! I am not sure – as a loyal Walsall F.C. supporter – whether to laugh, cry, swear or applaud.

The following day we spend at the Black Country Living Museum: fascinating, but ultimately impossible, to try and experience it through the eyes and ears of those who have never been before. The houses-made-from-iron, the realistic-as-possible recreation of a drift mine, the canal, the rolling mill, the shops, the pub, the whole extremely convincing Black Country town in the early twentieth century. 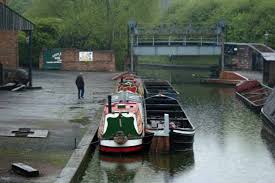 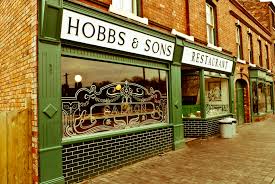 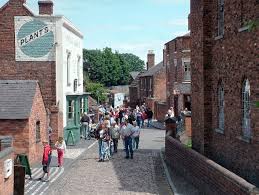 The guides appropriately dressed and charming in exactly the right way help visitors to understand the era and the technologies – although the guy giving the chain making demonstration is less than gracious – wrong side of the bed perhaps?

Tasty traditional fish and chips in paper eaten in warm drizzle … but the weather clears up and the planned barbecue back at home goes ahead. 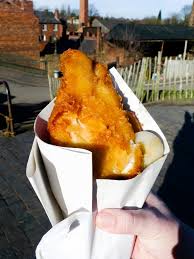 The fire pit comes out and Sicilians and Turks brave what must be, for them the coldest evening of the year. There is humour, friends drawing closer and singing (look out there will be rain – for sure!).

There’s always that sad moment when you have to say so long and god speed, with the hope that you will meet again. It is different – of course – these days with technology giving the opportunity to speak often, freely and cheaply … but it is nowhere near the same as spending time with people – in the flesh.

*And I can freely confess now that they recorded some fine tunes (Goin’ to California, Black Dog, Rock and Roll oh and the majestic Kashmir).

One thought on “Been Away … Been Around: the Second Chapter.”