There’s this bridge he drives across. Certain times; certain autumn mornings. But every day, routine-driven. An ancient-wise kind of winding river passes beneath it – from left to right – as once it passed below a castle that was one of the most important buildings in the young nation.

But the world turns, the Fates sit, spinning and grinning, hatching conspiracies great and small. And, as it turns the season’s come and go; mortal succession reminders and on certain autumn mornings (just a few, mind you when conjunctions of spheres fall just so) …

On these mornings that stretch of the river to his left is powdered with a low silken mist that hovers above the surface of the silvered grey slow rolling water like the patient mithril-woven breath of paradise angels. Perfectly white mute swans glide effortlessly on the current; holding station between reeded banks and there is calm. They may still be sleeping, in that happy place where the passage of time has no place.

But the sky high to his to his right is bleeding from the roots of Hell: a sad burned orange. The thick sulphur-blood that courses in the unhappy, stricken veins of Lucifer, the thick slabs and tides filling the frames of his glasses. It overtops the ancient church tower for it was old when gods were being birthed. It is fierce-cool but relentlessly, savagely beautiful, tumbling behind and around dark, purple edged menacing clouds.

The fairy-charmed mist will not last long. Neither will those daunting, magnificent skies. The extremes will be diluted. Inevitably. Lost to damned humdrum mediocrity. Like all of the rest. The rest of everything. That is now; that ever was. A real shame, he decides, straightening up and heading onwards with decisions to be made.

Because one of these days, goddammit, he’s going to take the car keys, house keys, office keys, the key to a briefcase he binned twelve years ago and hurl them, uncaring, finished with the millstone responsibilities, over the bridge parapet. Straight down into the stately, majestic flow: startle the swans, kneel down, bow his head to the bruised skies and hungrily suck in that heat, those fumes and fury … or throw the blasted keys at the sky and, not tracking their trajectory, dive into the charmed waters and paddle towards the peace that appears to lie in that direction.

But, dammit, his legs, cowardly traitors, are already carrying him away from the edge before his resolve can truly harden; before his brain can actually believe it; another day of mundane-coloured boredom needs must be endured.

One thought on “Coward’s Bridge ?” 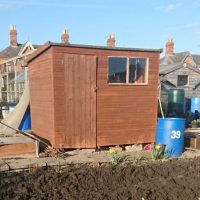