END_OF_DOCUMENT_TOKEN_TO_BE_REPLACED

Cannock Chase: scene of many of my walks, cycle rides and a part of various adventures.

On Tuesday, one of the few late-summer jewel weather days this year we took a walk there. Avoiding our usual starting points at Marquis Drive and Birches valley we opted for Rifle Range Corner. The half mile long unclassified road has been repaired, fewer serious pot holes but the car park remains lumpy.

Recentand extensive pine plantation clear felling made the routes unfamiliar (I swear that one of the white stone logging highways is a completely new road) but there are bonuses for wildlife in the disturbance. The heathland (again in the news as a “bandwagon” conservation issue here) is flourishing, with swathes of beautiful purple heather carpeting the low sweeps of slope. Some great management plans in place here and signs highlighting the spraying of bracken to further protect the habitat were everywhere. Fewer silver birch saplings about ( I love these trees but fully appreciate the way they eventually destroy heathland).

There were pools besides the roadways, and water gathered in the ruts of tractors and felling machinery, attracting dragonflies, but on some corners disturbed confusions of soils sport thistles; and here there was magic in profusion. Great scarves of large butterflies feasting together on purple flowers amid the thistledown heads.

Mostly peacock butterflies, lazy and “eyes” shining like treasures on open wings, big dark bodies like brooches on the flowers. So content and still – until I approached with the camera* (of course).

But also red admirals, at first un-noticed. But the black wings so super dark and the red strips so very clear in the cloud washed sunshine. The air was warm, the wind in this valley almost non-existent. A fine sight to see and so pleasing after what has, apparently been a poor year for butterflies generally.    Among and buzzing around these majestic flying flowers were honey bees, many of them harvesting the heather bells, bumble bees, bee flies and other insects – a real butterfly ball! 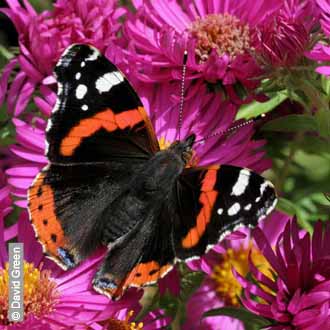 *Small confession, none of these are my photos, my camera would not focus as it was automatically set on some focus-on-smile” setting. Have to smile, all my fault, but these images from the internet – bless it!